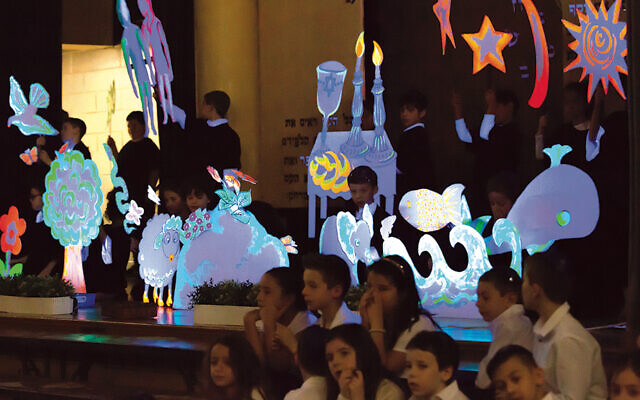 The Schechter School’s second-graders got their chumashim in a presentation that included these scenes of creation.

I am blessed with nine grandchildren.

In the language of Jewish yeshivot and day schools, that’s nine siddur presentations and nine chumash ceremonies. I have seen my progeny eagerly accept siddurim eight times; chumashim, seven times. (Actually, having three children, I guess I need to add another three of both.) Each time I attend one of these presentations, I am moved, proud, and delighted. This time, however, I also was impressed.

No, I am not singling out the Solomon Schechter Day School of Bergen County in New Milford for inspiring its charges with more kavanah, or for having more talented second-graders, or for caring more about the souls of their students than do other schools. What I am doing is agreeing with its head of school, Steve Freedman, who said — wide-eyed after the ceremony — that he had thought — naively, as it turned out — that he had to go to New York to see a good show.

The show preceding the chumash presentation, sung and spoken totally in Hebrew by the school’s 36 second-grade students (one was out with the flu), was mesmerizing from beginning to end. For example, in depicting creation, students put on special gloves that reflected multicolored lights as they moved their arms and stumbled about, emulating chaos.

Then, one at a time, other students entered bearing the iconic symbols that mark the seven days of creation. Flanked by a large model of a Torah scroll and a silver yad, the brightly colored three-dimensional trees, fish, animals, oceans, and stars filled the auditorium stage as God filled the earth. Kudos to the art teacher and her helpers — it was truly stunning.

Noah’s ark — well, a facsimile of it — was later carted in by several second-graders, while others portrayed pairs of animals. All the while, the children sang — some songs were familiar, others not. Abraham was introduced through a video screening of the second-graders, decked out in beards and desert-appropriate clothing, against a backdrop of camels and sand. Joseph — yasher koach to the stand-in, because it was the original Joseph who had the flu — modeled his coat of many colors as others danced around him to the music of Andrew Lloyd Webber.

And then — this was wonderful — the students groaned piteously and mopped their brows as they shoveled, scrubbed clothes, and lifted cardboard boxes to build a pyramid. They were telling a story they know well, and it worked. 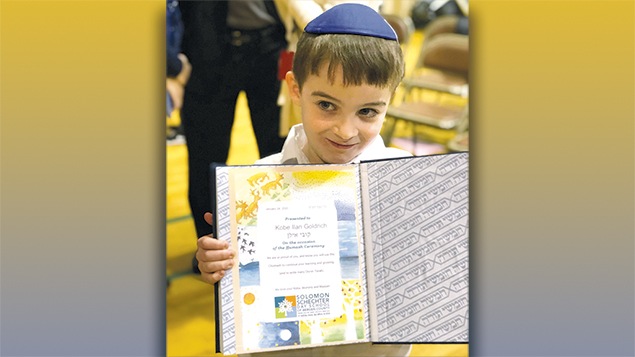 Lois Goldrich’s grandson Kobe is one of those second-graders; he holds his new chumash.

They were bringing the Torah to life.

Next up were long turquoise and green scarves waved by students to simulate the sea the Israelites crossed to their freedom. And later, when they received the Torah, students and faculty took up shofarot (a hat-tip to my grandson for his masterful blast) and rocked the rafters.

Have I mentioned the wandering accordionist (a shout-out to music teacher Irit) accompanied by the ethereal and harmonic xylophone stylings of several second-grade musicians? Or the dramatic ending ceremony, where glove-clad parents unrolled a Torah and encircled their children while school Rabbi Fred Elias picked out a passage for all to sing? And a bevy of local rabbis, also in the circle, recited the Shehecheyanu?

There was so much going on — with such spirit and such coordination — that you might almost have mistaken this for mere entertainment. But it was so much more than that. The children were almost giddy about receiving their own chumashim, and eagerly turned the pages when they sat back down.

The school’s early childhood and lower school principal, Ricky Stamler-Goldberg, introduced the program by reading some answers her students had written to a question about the significance of the Torah. “It tells our story,” one student wrote. Clearly, all of the second-graders have imbibed that story, and today they joyfully shared it — in the language in which it was written — with their proud families and friends.