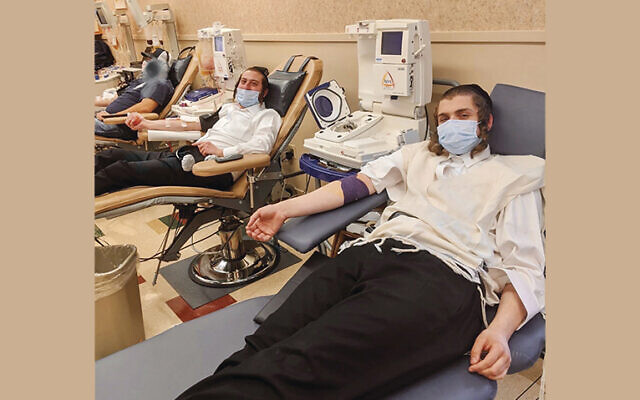 It’s about the connections.

The covid-19 virus passes from person to person. The more connections, the more it spreads; hence the lockdown.

But sometimes connections prove crucial in fighting the virus.

Chaim Lebovits of Monsey turned out to have the right connections — and the drive and determination — to do something about fighting the coronavirus.

He has played a leading role in connecting covid survivors in Orthodox communities hit hard by the virus with doctors trying to cure infected patients by using the antibodies in the blood of people who successfully fought it off.

So far, thousands of Orthodox Jews in the greater New York area have been screened for covid antibodies. People who have enough antibodies are donating blood plasma containing those antibodies for patients who need them.

Mr. Lebovits is a shoe wholesaler. “I import from China and India and Turkey and sell to mom and pop shops,” he said.

But what gave him the connections to help amid the pandemic is what he calls his “side mitzvah” — acting as as an informal go-between with medical professionals and people who need healing.

“It came out of a need at the local level,” he said. “For most people — especially within the chassidishe community — the medical language is so foreign to them. It’s like talking Greek. They want someone who can translate it into living room language.”

As his side mitzvah progressed, he picked up more and more contacts in the medical community. “The more you get involved, the more connections you get, the more people you can rely on, the more friends you get,” he said.

One of those connections is Dr. Shmuel Shoham, an associate professor at Johns Hopkins University’s medical school, who specializes is infectious diseases. At John Hopkins, he was on the team that got FDA approval to treat covid patients with antibodies from blood donations. And he realized that just as Mr. Lebovits had connections in the medical community, he had connections in the Orthodox communities.

Mr. Lebovits was eager to help.

“This gives hope to people and it seems to be saving people’s lives,” he said.

He set to work around the clock, organizing mass testing and then arranging for blood donations to make their way to clinical trials at John Hopkins, the Mayo Clinic, and Mount Sinai Hospital in Manhattan. The major national Orthodox organizations — the Orthodox Union and Agudath Israel — joined his effort.

As of a week ago, more than 10,000 people had been tested for antibodies. 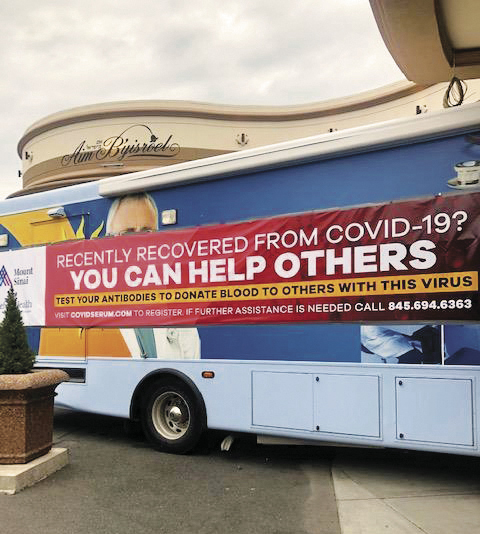 Unlike the test for the live virus, which requires a painful nasal swab, the antibody test just needs two vials of blood, which are drawn by a phlebotomist. The laboratory measures whether there are any antibodies — indicating a previous infection — and whether the level of antibodies is high enough to be used as a cure.

Medical professionals, including the New York health department, caution that there is as yet no evidence that antibodies prevent a second reinfection, and warn that the results of the test should not be used as a reason for slacking off on social distancing.

If you believe that you were infected — whether because you were tested and the results were positive, or because you experienced symptoms — and if you have been symptom-free for two weeks, you can sign up to be tested at covidserum.com.

In Bergen County, a one-day testing drive was scheduled for Thursday, April  30, at Yeshivat He’Atid in Teaneck.

“If it’s successful, we might do another one,” Ora Kornbluth said. Ms. Kornbluth is the yeshiva’s executive director and a council member in neighboring Bergenfield. Mount Sinai reached out to her as it seeks to tap Teaneck’s vein of covid infection. Holy Name Medical Center also is taking part, lending some of its phlebotomists to the endeavor.

Ms. Kornbluth said she expected 600 to 1,000 people to be tested, with her team of volunteers staffing a dozen widely spaced tables in the school’s lunch room and gym. “It’s a way for our community to get together and do something,” she said. “A way to help save lives.”

A couple of days after their blood is drawn, potential donors will be told the level of their antibodies — and if they are high enough, they will be asked to donate plasma. That procedure takes about an hour at a blood center.

Thanks to Mr. Lebovits’s efforts, blood centers in the New York area have been booked solid. Last week, he led a caravan of 120 chasidim from Monsey and New Square to Delaware, where they donated blood plasma. The group included his 18-year-old son, Nuchem Lebovits, as well as Benjamin Spitzer, the son of New Square’s mayor, Israel Spitzer.

According to Mr. Lebovits, people with the requisite level of antibodies can donate plasma every seven days.

As to its effectiveness — Mr. Lebovits emphasizes that he is not a doctor, but being able to communicate with doctors is the core of his avocation. He said that the antibody infusion “works best in the first seven to 10 days of the syndrome. But you still have very good numbers even in the late stage of the disease. I know of cases where people were on a ventilator over two weeks, and beginning within twelve hours of the treatment they begin to convalesce.”