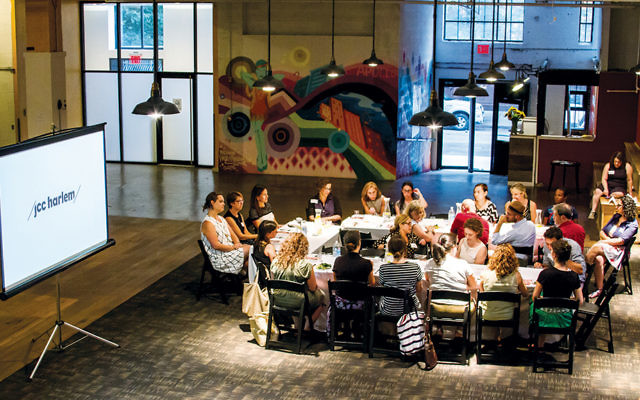 Living in the Jewish mecca of Manhattan’s Upper West Side, Rabbi Laurie Phillips was loath to uproot her family when her rent shot up two years ago.

But in looking for housing around the city, Phillips was drawn to Harlem’s diverse culture — not to mention its spacious apartments.

Phillips, 48, now lives with her husband, her stepson, and their dog in a brownstone with a backyard near Marcus Garvey Park, in the heart of this city’s historically African-American quarter.

“We started looking further uptown and downtown, and loved the neighborhood in Harlem,” Phillips said. “We’re excited about being in a diverse place, a place that had more texture and energy. For the same amount [of money], we have more space.”

Phillips is one of a growing number of Jews moving to a neighborhood that a century ago boasted one of the largest Jewish communities in New York — perhaps even the world. Attracted by the location, the relatively affordable apartments, and the diverse population, the new Jewish Harlemites are among a wave of recent arrivals that have transformed the neighborhood since the turn of the millennium. According to an analysis by the New York Times, by 2008 Harlem’s African-American population made up only 40 percent of the neighborhood.

According to “The Jews of Harlem,” a soon-to-be-published book by Jeffrey Gurock, central Harlem’s Jewish population increased ninefold between 1990 and 2011 — from 300 to 2,700. As of 2011, Gurock wrote, Jews made up about 20 percent of central Harlem’s approximately 13,000 Caucasian residents. The new Harlemites have launched a handful of Jewish initiatives, from independent prayer groups to an Israeli cafe. The neighborhood also boasts a Chabad center, which was founded nearly a decade ago, and a Hebrew-language charter school that opened in 2013.

“The return of Jews to Harlem is part of the gentrification of the city, in the same sense that young Jews have moved to new neighborhoods all over the city,” said Gurock, a professor of Jewish history at Yeshiva University. “You walk 125th Street in the evening, you have all these cafes, bars, and restaurants. Harlem is a little behind [in terms of gentrification], but growing immensely.”

This month, with the opening of JCC Harlem, an extension of the Upper West Side’s JCC Manhattan, Harlem’s Jewish footprint grew larger. The 6,000-square-foot facility — with a large atrium, classrooms, and a small lofted area — aims to serve as a gathering space for a number of local organizations, both Jewish and non-Jewish, as well as to promote Jewish life in the neighborhood.

“There are Jews here, and they probably want to experience Jewish holidays and meet other people and take Jewish values for a walk,” said Rabbi Joy Levitt, JCC Manhattan’s executive director. “The fact that this place doesn’t have synagogues and much infrastructure isn’t an indication that the folks who live here don’t want Jewish life.”

According to Gurock, Harlem’s earlier Jewish community included well-to-do Jews living in relatively large homes, as well as poorer families who were squeezed out of the Lower East Side. But after World War I, many Jews moved to newly constructed neighborhoods across the city, while many African-Americans, barred by racist policies, stayed in Harlem. At its peak in 1917, Harlem’s Jewish community numbered 175,000 — a figure that plummeted over the next 60 years.

Today, some Harlem Jews depict their community as a growing hodgepodge of young families with varying beliefs and affiliations. Steven I. Weiss, whose family lived in the Manhattan Jewish neighborhoods of Washington Heights and the Lower East Side before moving to Harlem in 2013, says the local Jewish community’s makeup is as if “you randomly chose Jewish families from the rest of New York and placed them here.”

“The lines get blurred,” he said. “It’s to a degree what you see in smaller towns, where people just get along with each other because they can’t choose their friends based on having a complete overlap of ideological and religious and cultural viewpoints.”

Weiss is a member of the Harlem Minyan, an independent egalitarian prayer group that meets for monthly Friday night services, as well as for holidays and the occasional Saturday morning. And that’s not the only game in town: Phillips founded Beineinu, a group that facilitates informal Jewish experiences throughout New York. Lab/Shul, which describes itself as an “experimental community for sacred Jewish gatherings,” has held services in Harlem and hosted a pre-Rosh Hashanah service last Sunday at JCC Harlem.

“I think people that move to Harlem are seeking something a little bit different than Brooklyn and Manhattan,” said Naomi Less, Lab/Shul’s associate director. “Every neighborhood has its own flavor … and so what we found with Harlem is that people are willing to show up and be part of [it] and roll up their sleeves.”

JCC Harlem plans to collaborate and provide space for local Jewish groups, but it doesn’t want to take space from Harlem’s African-American community. To that end, JCC’s staff has embarked on a listening tour of sorts, to learn how the center can work with its black neighbors, and it plans to encourage Jewish volunteers to work with community groups.

One store owner who hopes to benefit from the JCC is Alvin Lee Smalls, an African-American man who has been baking cinnamon-nut rugelach since the 1960s and owns a small shop down the street from the JCC. He’s advertising “rugelach by a brother.” Smalls hopes the JCC will bring more customers, but worries that continued gentrification will push longtime black residents out of Harlem.

“What can we do?” he said. “It’s bad for all the people that were living around here that can’t afford the rent here, but for business it’s good.”

Smalls says gentrification hasn’t created strife between Harlem’s blacks and Jews. Another Harlem restaurateur, Sivan Baron, says that if anything, she feels interracial relations are improving. Baron, an Israeli, is the proprietor of Silvana, an Israeli cafe near the JCC, and also owns a local French restaurant as well as a music venue.

Sitting in her bright cafe surrounded by the artisanal goods from around the world that she sells, including shoulder bags and scarves, Baron says she encountered some hostility when she first moved to Harlem. But now, many locals are used to the neighborhood’s changing demographics.

“I got all kinds of remarks — ‘Go back to where you came from,’” she recalled. “Today we’re open to everyone, and I have a lot of black American neighbors, and they come here to Silvana.”

But though her businesses are successful, Baron herself soon will be leaving the neighborhood. Prices are rising, so she and her husband are moving to a house in the Bronx. JTA Wire Service