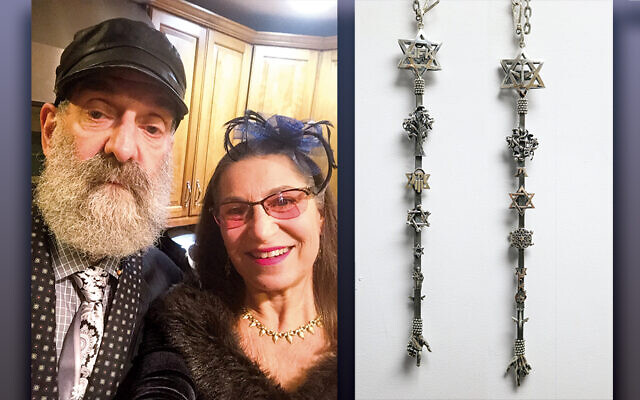 Mitchell Egenberg and his wife, Ellie. At right, front and back views of the yad that Mr. Egenberg created.

If Alexander Calder could have a piece of art at JFK airport, so could he, Mitchell Egenberg of Montebello (in the eruv of Monsey, Mr. Egenberg made clear), Mr. Egenberg thought.

On December 26, Mr. Egenberg, a jeweler who prides himself on creating pieces of art, will donate a yad — the pointer Torah-readers use as they read from a Torah scroll — to the Jewish chapel at the huge airport in Queens.

Mr. Egenberg is glad to tell you that he’s also a chef, a sculptor, and a one-time roofer who could fabricate and install copper roofs. He is also very obviously a story-teller, he’s got a favorite character — himself — and he tells his stories with verve and style.

So of course there is a story behind the yad, a story that connects with many other stories that make up his crowded life.

Mr. Egenberg grew up in Bayonne; he took many art classes at Bayonne High School, but his life as an artist started much earlier, when he was 5. “My grandfather had a roofing company, and I have always worked with metal,” he said. “I used to walk with him, and he taught me how to make helmets for all my soldiers.” That Bayonne-based company was called Max Bayroff; Mr. Egenberg worked there for some time. Most of its product is straightforward, just regular old paper-and-pitch roofs, but Mr. Egenberg’s work there included the copper roof that now, 40-some-odd years later, is the proudly green cover of the Morristown Museum.

While he worked as a roofer, Mr. Egenberg went to college; he got a bachelor’s degree from Jersey City State College. He studied fine and applied art, including sculpture and jewelry design; he taught art for a short time, and he took more art courses at the New Jersey Institute of Technology, studied blueprint reading and drawing, and meant to work with his uncles, who by then had taken over the roofing business.

But they didn’t work particularly well together, and anyway, Mr. Egenberg had other interests. He started his own small high-end jewelry business in 1974. “It was called Jewelry by Mitch, and I made very sculptural pieces of jewelry, nothing like I make now.” He eventually took an internship with a jeweler on 47th street, bought the business from his teacher, the owner, when the older man basically had to get out of town — “After a year and a half, two years, a situation came up that I could buy from the guy because he had to leave 47th street. He did some unscrupulous things.” Mr. Egenberg had to work to clear his own reputation from the cloud the previous owner had left over the business — but after about five years, he had completed that clean-up job.

His business, Eligere Mitchell Egenberg, has flourished ever since. Mr. Egenberg learned how to work with all sorts of stones and metals, and he has created art.

“I used to work on Shabbat,” he said. “One Saturday afternoon, I went down to the vault” — it was a shared vault — “and found a package of diamonds, worth about $100,000 then.” It was some time in the late 1970s or early 1980s; the diamonds would be worth considerably more now. He knew that he had to “find the rightful owner.”

So “I took them to the guard outside, and the guard said to me, ‘Are you sure you want to give these diamonds back? Do you want to split it?’ And I said ‘Why would I want to do that? They don’t belong to me. I want to find the rightful owner.’

“So I gave him my phone number, and he called me, and he said ‘Do you want to split it three ways? My son will take a third, I’ll take a third, and you can take a third.’ And my answer to him was ‘If you think you will have your job on Monday, you have another think coming.’ His job was to protect us.

Instead, Mr. Egenberg insisted that the landlord post signs about the diamonds. He did, but said that the discovery was not of diamonds, but of what he calls CZ. Cubic zirconium.

“So I said ‘Look, I am going to return all the diamonds to you. I don’t want you to come back and accuse me of stealing a single stone.’ So I gave him the diamonds and he reached into his pocket and gave me a $100 reward. And I put it in a pushke.”

He’s had a blessed life, Mr. Egenberg said; he and his wife, Ellie Haberman Egenberg, have been married for decades. Her family’s been in the jewelry business for 80 years, he said. “She’s my eshet chayil,” a woman of valor. “We have five magnificent children and a very successful business.

“That’s because Hashem” — God — “has blessed me over the years, and I really believe that it’s because I saved this man’s life by giving him back his diamonds. I have been blessed ever since.”

Mr. Egenberg has given jewelry to the organizations he believes in. Many — although certainly not all — are Jewish. He grew up as a member of Congregation Ohev Zedek, the Orthodox synagogue that still is open in Bayonne, and now he is an active (and, he says with pleasure, very generous) member of Congregation Shaarey Israel in Montebello.

When his daughter became bat mitzvah, he donated a yad he’d made to Ohev Zedek. “I custom built a Holocaust yad,” he said. “It is skeletal; it has the 12 tribes of Israel and it’s made out of skulls and bones. It’s sterling silver, a magnificent work of art. And people came to me and said ‘The yad is so beautiful but we should use it only a couple of times a year. So I said ‘Okay, fine, I will make another one.’ I made it and I donated it. It is really a magnificent yad.”

That brings us to the airport yad.

“That came about because I took my daughter to the airport to go to Israel to study for a year,” Mr. Egenberg said. “Every time I go to into that terminal, I see the sculpture by Alexander Calder. I studied him in college, along with numerous other artists. I truly feel that if I had stayed as a sculptor, as a true artist, my pieces would be in museums today.

“So I was talking to the rabbi at JFK, and I said I would love to make a yad for your synagogue, to have it hang in the same terminal as Alexander Calder. It was an ego thing. I did it for my ego.

“The rabbi asked ‘Are you really willing to make us a yad?’ and I said ‘My word is my bond. I am free and accepted’” — that means, he said, that he’s a Freemason, and using that group’s phrase — “‘and when I say something, my word is my bond.”

He made the yad; he hasn’t shown it to the rabbi yet. “I have not sent him pictures. He has no idea what he is getting. I am pretty excited. I love all people, but I love Jews more, and every Jew who goes to Israel or comes from Israel and goes into the synagogue will see the yad. If they read Torah with it, they will break the psychic distance and they will have an experience that they’ve never had before.

“And I will have the experience of knowing that my yad hangs in JFK, like an Alexander Calder.”