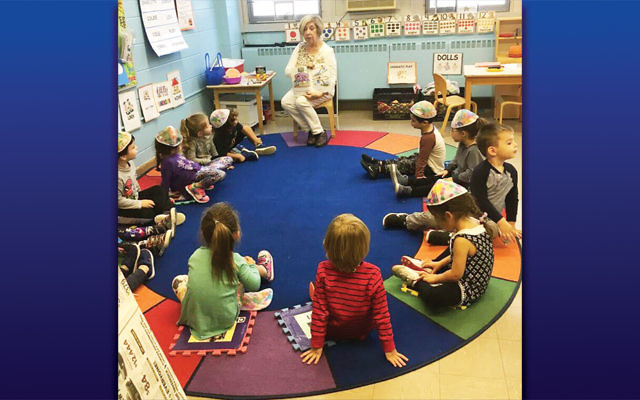 GrandPal Karen Albert reads to children in the early childhood program at Temple Emanuel of the Pascack Valley.

When three separate parts of a synagogue community work together on one program, it’s a safe bet that it is something special.

And indeed, according to Susan Liebeskind, chair of the Community of Caring committee at Temple Emanuel of the Pascack Valley in Woodcliff Lake, GrandPals is a special program.

Co-sponsored by the committee and the synagogue’s sisterhood, working in conjunction with the shul’s early childhood program, the initiative brings together longtime senior members of the congregation with 3- and 4-year-olds in the ECP.

Ms. Liebeskind said the plan took shape six years ago, when Cari Brandon, then the sisterhood’s president, conceived the idea of inviting seniors from the congregation who did not have any grandchildren living nearby to the early childhood classes. GrandPals gives the seniors an opportunity to celebrate Shabbat on Fridays with the children at school, to sing songs with them in the sanctuary, to listen to stories told by the rabbi or cantor, and then to visit the children’s classrooms as “honored guests.”

“They help the kids with Shabbat prayers and read them a story,” Ms. Liebeskind said, noting that the children, in turn, may make artwork to present to their visitors. “They delight in watching the children do their thing, and it’s fun for the children to have an honored guest.”

A GrandPals event on October 28 drew about six seniors, although attendance generally ranges from 12 to 14. “It depends on the weather and who’s available,” Ms. Liebeskind said. She calls each senior individually to issue an invitation. Sisterhood volunteers assist as well, making calls to potential attendees and helping to provide rides. “We try to hold these events as frequently as possible,” she said. “Some people say they’re happy to visit their own children but have no interest in others, while some say they would come every week.”

Longtime GrandPal Selma Dubnick, who lives in Old Tappan and joined the synagogue in 1978, said she participates in the program because “I just enjoy being with little children.” Ms. Dubnick — who spoke with us immediately after leading a Hadassah book discussion — described herself as “a young 93.”

“They’re so adorable,” she said of the children. “Just like sponges. This year, I saw some of the older 4s and was amazed at how they could count. Kids learn today what we learned in first grade. They could teach us,” she joked. Her own grandchildren are somewhat older than those she meets in the ECP. The closest in age is a 15-year-old grandson who lives in New York City. Two other grandchildren, 21 and 24, live in Massachusetts.

“I’m a ham, I love to read to them,” she said of her visits to the synagogue school. “I didn’t get to read this year,” she noted, but she did get to join the children in reciting the blessings over the candles.

“It’s a wonderful program,” she added. “It gives children an opportunity to see another generation. Some children have grandparents who live far away or are no longer living. And it’s wonderful for the grandparents as well as for the children. I heartily recommend it for other temples.”

Simone Wilker, who lives in the Township of Washington and is on the board of Temple Emanuel, said that while the GrandPals program has been around for some years, “it has taken on a new meaning for me.

“I recently became a grandmother,” she said, adding that her fourth son and his family live in Atlanta. “It is sad for me that my two little granddaughters are far away. I love being with the ECP children. And it keeps me up-to-date on what 2-, 3-, and 4-year-olds are doing. Then when I visit my granddaughters, I know what clothes and toys kids their age like. And as the mother of five, I really, really like kids and I enjoy hanging out with the ECP children. They are absolutely adorable. It makes me smile. To me, being surrounded by children and smiling is what the world is all about.”

While, for obvious reasons, we were not able to conduct interviews with the children themselves, we did find a valuable source — Rabbi Loren Monosov, rabbi of the congregation — whose 4-year- old daughter, Hannah, has enjoyed the company of a GrandPal.

While Hannah “didn’t have much to say, she did say that ‘It was special to have a GrandPal in our class,’” Rabbi Monosov reported. “The nice piece about it for me was that her Shabbat GrandPal was someone that I spend every Friday night with at Shabbat services. It was nice for Hannah to get to know someone that I enjoy spending Shabbat with each week.”

The early childhood program’s director, Debbie Wanamaker, said that she went into every classroom hosting a GrandPal at the October 28 event. She said that the school, which has three classes for 3-year-olds and two classes for 4-year-olds, tries to cap the number of visitors so that the children will not be overwhelmed.

“The children became very comfortable with them,” she said. “Some were sitting on their laps. The connection between the children and the GrandPals was fabulous,” and the two generations sang songs they both knew.

“It was wonderful, warm, and nurturing,” she said. “They’re new bffs.” The “instant connection,” she said, was helped by the fact that both the seniors and children know the synagogue building and are comfortable in it.

“It’s a program every school should have,” Ms. Wanamaker said.