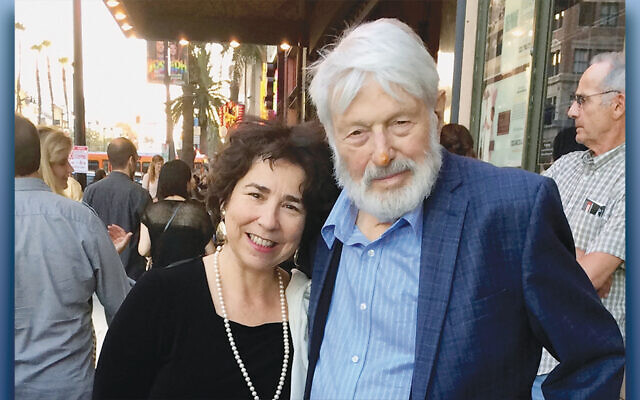 Theodore Bikel and his wife, Aimee Ginsberg Bikel, at the Hollywood Walk of Fame.

Five years ago, the editors of Moment Magazine created what they called the Chanukah Light project. They asked a number of prominent people to write short stories about the Festival of Lights, which were published in the magazine and then read on NPR.

One of the most moving of these was a lightly fictionalized reminiscence from Theodore Bikel. Called “The City of Light,” it was about his upbringing in pre-World War II Vienna, at a time when it was still a place of culture, where amity ruled.

At least on the surface.

Last week, I was part of a group of the late performer’s family, friends, and fans who gathered in Peter (of Peter, Paul and Mary) Yarrow’s Upper West Side apartment (yes, I’m showing off) to celebrate Bikel and the publication of an expanded version of that story (with illustrations by Noah Phillips) as a young adult book.

There were more than 60 of us in the apartment’s great room, a huge, high-ceiling room with a large window that fills it with sunshine (or at least would have if it hadn’t been winter). Mr. Yarrow told us that this is where he usually hosts benefits — and he reminded us how lucky we were not to be asked for money.

We’d met twice before, so I knew what to expect. Peter Yarrow is a kisser. So my wife and I were prepared for him.

He made the rounds as guests drank his wine (several varieties) and ate his cheese and chocolate chip cookies. There were plenty of chairs and copies of the book for sale. (Again it was not a benefit.)

Bikel’s widow, Aimee Ginsberg Bikel, flitted around the room, greeting family, friends, and the publisher. She essentially took Bikel’s very short story and doubled it in size. She also added a forward, an afterward, a Yiddish glossary, Theo’s grandmother’s recipe for honey cake, and even the lyrics and music of a Chanukah song Theo recorded.

In her forward, Aimee acknowledges that many if not most of the youngsters she hopes read the book will not know who her husband was. (He died at 91 in 2015.) She suggests they “ask your grandparents or maybe even your parents about him.”

Of course, all young people today have to do is Google to discover that her husband was a world-renowned guitarist and folk singer (he cofounded the Newport Folk Festival), an Academy Award-nominated movie star, and a theater regular. He originated the role of Captain von Trapp in the Broadway production of “The Sound of Music,” and played he played Tevye, the milkman, in “Fiddler on the Roof” more often than any other actor.

What Google doesn’t tell you is that Bikel was a mensch. He was a union man (and the long-time president of the Actors’ Equity), a supporter of Israel, and always available to sing for a liberal cause.

When the editors at Moment suggested the idea of turning Bikel’s story into a book project, Aimee was all in.

“Truthfully, I was planning it anyway,” she said. “I certainly knew his childhood stories so well that I sometimes think of them as my own. He talked a lot about his childhood in the last years of his life.

“I knew his voice, and in my own voice I added the forward and afterward.”

The unnamed boy of the story, obviously a doppelgänger for Theo, lives a carefree life in Vienna. His home, which he shares with his parents and oma — his grandmother — is largely secular, though his family celebrates Jewish holidays.

When they do go, his family attends a neighborhood synagogue. The boy, though, has visited the Stadttempel, the city’s grand temple, where he was impressed by its ner tamid, its eternal flame.

Like many his age, the boy loves superheroes — but his was Judah the Maccabee. After the Anschluss, he went to sleep at night dreaming that Judah would come to life to save the Jews.

But he didn’t show up.

At school, schoolmates beat the boy. Teachers saw it, but they didn’t intervene. On Kristallnacht, Jewish owned stores and the Stadttempel were attacked. And then it was open season on all Jews.

The forward explains — although the book does not — that the boy and his parents were able to get exit visas and escape in time. Unfortunately, they had to leave Theo’s grandmother behind.

Many years later, like Theo himself, the boy, now an old man with grandchildren of his own, returns to Vienna and visits his old house and the restored Stadttempel. But something is different in the grand synagogue.

A replica of the original ner tamid hung there, but although it was lit, “there seemed to be no real light emanating from it.” The boy discovered then that the real eternal flame “had been there all the time … in his own heart.”

It was fitting, therefore, that Peter began the proceedings with “Light One Candle,” the rousing Peter, Paul and Mary Chanukah song.

Theo, Peter said, “was not only a friend, but a mentor to me. And like he says in the book, forgiveness and love must emerge from this tragedy.”

In a separate telephone interview, Aimee said working in the book made her determined to to “work all the time to keep Theo’s legacy alive.”

She founded the Theodore Bikel Legacy Project, which provides speakers to talk to audiences about “Theo’s use of his art and music in the service of tikkun olam.

“Theo loved to sing for singing’s sake,” she said. “He loved to act for acting’s sake. But the most important thing was to use his voice for justice and speak up for the values he believes in.”

Most of the time, Aimee admits, the audience for these talks skews older. But every once in a while a young person sneaks in. Recently one approached the speaker after the talk, amazed by Theo Bikel and what he stood for.

Curt Schleier of River Vale is a writer whose work often is published in the Jewish Standard and by the Jewish Telegraphic Agency.