Don’t even call it school.

At the the Orangetown Jewish Center in Orangeburg, the Tuesday and Thursday afternoon and Sunday morning educational assemblage of kids in grades K-7 has been redubbed Kulanu, Hebrew for “all of us.” And while the program is overseen by an educational director and the synagogue has clear educational goals for the children, the Kulanu program rejects the model of Jewish education as school.

Because really, who wants more school after school?

Kulanu, which rolled out in September, is the product of years of planning by OJC leadership — as well as long-standing frustration with the traditional Hebrew school model of a teacher standing in front of a blackboard, facing rows of students sitting at desks.

“When we really looked at it starting three years ago, attendance wasn’t so good,” Rabbi Paula Mack Drill said. “The kids’ learning wasn’t so good. The holy religion of sports was overshadowing parents’ commitment to religious education.”

For the spirit of the new program, Rabbi Drill and her colleagues looked to the immersive education of summer camp. “All of us come from the Camp Ramah model,” she said; Ramah is the system of Jewish camps that the Conservative movement runs. Most of them are sleepaway, but one of its day camps is in Nyack.

And just as camp happens in all sorts of places — the dining hall, the dock, the synagogue, the sports field — Kulanu happens in a variety of different places in the synagogue building. Classrooms were expanded and refurnished and repurposed. There is a “living room,” with a variety of comfortable chairs on one side, and whiteboard tables on the other.

“Where do you learn to be Jewish?” Rabbi Drill says, quoting her colleague Rabbi Craig Scheff. “In your living room, sitting around with your family.”

Rabbi Miriam Midlarsky Lichtenfeld came to Orangetown this year to direct Kulanu. She teaches about Israel and she uses the living room space to do it. “I’ll start out the class with a discussion,” she said. “This past week we were talking about inclusion projects in Israel. Some of the things the IDF is doing.”

The discussion took place amid the bean bag chairs.

“Then we went to the other side of the room and made cards to send to people in Israel,” she said. 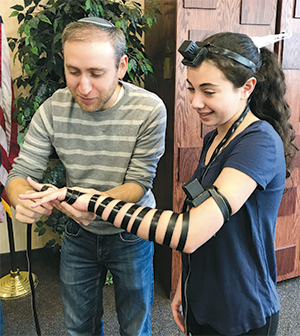 Learning to put on tefillin.

Israel is one of four components of the Kulanu curriculum. The schedule is designed so that every half hour kids move from one place to another, from one topic to another, and from one learning modality to another.

“The pace is pretty quick,” Rabbi Drill said. “Twenty-five minutes of learning and then switch. These less-than-half-hour modules of learning turn out to be a really good thing for most of the kids and the length of their attention span.”

For Hebrew instruction, Kulanu continues the OJC’s five-year-old Yachad program, which recruits volunteers to work on Hebrew reading one-on-one with the students.

“Last year, three quarters of the kids were learning for their bar and bat mitzvah from transliteration,” Rabbi Drill said. “This year, with the first batch of seventh graders who have been through Yachad, the kids are reading Hebrew.”

“We model what it means to be a chevruta,” Rabbi Drill said. “How to echo back what your partner says. How to disagree. How to talk to each other — which is very countercultural right now.”

On the chevruta curriculum: “The greatest hits of the Torah. We want the kids to be deeply steeped in the basic stories. For the past several weeks we studied tzedek tzedek tirdof — justice, justice shall you pursue. We did a little bit of law.” And in Kulanu’s spirit of project-based learning, the kids created PSA videos about where you can send your tzedakah money.

Along those lines, Rabbi Lichtenfeld organized a Hebrew-language coffee house where the kids learned basic Hebrew phrases to order coffee, cake, and donuts. The older kids designed the menu and cooked and prepared the food for the younger kids to order and eat.

“There’s much more of a one-room schoolhouse atmosphere,” Rabbi Drill said; students from all the grades sometimes study together.

Along with Hebrew and Israel and Torah, the curriculum also includes holidays and the life cycle. There’s also a 25-minute block devoted to “value-based games,” Rabbi Lichtenfeld said. “There are a variety of different games. A lot of it is based on building community and leadership skills with a Jewish spin on it.”

And there’s a prayer space, featuring a Kotel-style wall for leaving prayers, where Amichai Margolis, the congregation’s music leader, teaches prayers and songs.

“He’s our secret bullet,” Rabbi Drill said. “We have seventh graders who are happy to sing.”

While the changes have left a few children “a little bewildered, there are definitely kids who are so much happier, who are really excited,” Rabbi Drill said.

“I think the kids are learning. When I ask a question from something that happened three weeks ago, the kids are holding on to it. When I started back after the winter break and asked what is the meaning of tzedakah, they remember. I really think the difference in the learning is that the kids are doing it themselves.”

Oh, and about the sports. Until this year, Orangetown asked third- through seventh-graders to commit to two days of Jewish schooling. They resisted. So Kulanu addressed the problem by adding a third day. The twist is that students still only have to go twice a week. While Tuesday afternoon still is required, they can choose their second day — it’s either Sunday morning or Thursday afternoon. That’s two hours more teaching for the congregation’s rabbis each week, but the flexibility eliminates many scheduling conflicts. Kulanu runs on a trimester program, and students can change their second day each trimester.

“We were hoping to think outside the box, and sort of break open the classroom,” Amy Edelstein said. Ms. Edelstein was part of the committee that developed the program. Her older daughter, Rebecca, is a second grader in Kulanu. “They feel they’re coming to be with their friends and happen to be learning while they’re doing. Rebecca definitely enjoys it. She loves the social aspect, the friends she’s seeing once a week.”