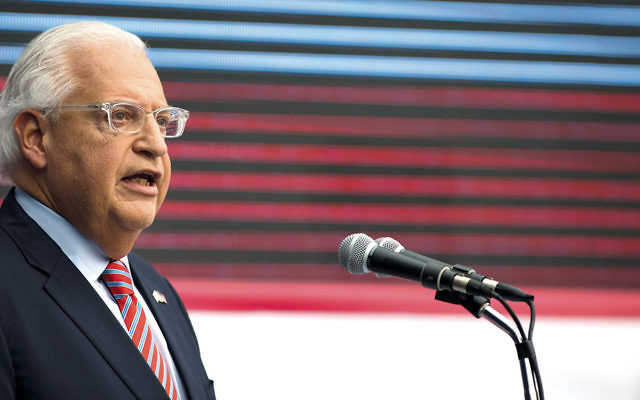 U.S. Ambassador to Israel David Friedman speaks at the opening of the U.S. Embassy in Jerusalem on May 14, 2018. (Lior Mizrahi/Getty Images)

WASHINGTON — David Friedman, the U.S. ambassador to Israel, waded into the debate over media coverage of Israel with a pointed request to journalists.

Reporters should “just keep your mouths shut until you figure it out,” he was quoted as saying at a conference launching a new Jerusalem bureau for MediaLine, a Middle East news service.

“Because otherwise, all you’re doing is creating impressions that have no basis in fact,” Friedman said. “They fit a narrative. They fit an opinion. They fit an agenda. But it’s not reporting, because it’s not based on hard, factual analysis.”

Friedman was referring to reporting on Israel’s efforts to repel Palestinian protesters who were attempting to breach the fence separating Israel and the Gaza Strip. Israeli troops have killed more than 100 Palestinians in the rioting, which has been taking place weekly for two months.

Like many clashes between Israelis and Palestinians, the latest ones led to accusations by Israel and its supporters that the media had portrayed Israel as disproportionately aggressive and the Palestinians as innocent victims.

Friedman said he was addressing his remarks to “my friends in the United States and one Israeli newspaper I’ve been known to criticize here,” according to Haaretz, a newspaper he recently accused of lacking “decency.”

Friedman complained that journalists are not quoting experts about armed conflict.

“It would seem to me that in a journalistic environment where nine out of 10 articles that are written about the Gaza conflict are critical of Israel, you’d think that some journalists would take the time and go and meet with experts and try to understand what could have been done differently or better before they criticize,” The Times of Israel quoted the ambassador as saying. “And I just haven’t seen it.”

Friedman did not provide examples or substantiate the 9-1 bias, nor does he say — at least not in what’s quoted — whether he was referring to breaking news, analysis, or opinion writing.

But if his main complaint is that reporters did not do the legwork in telling the story right, it is not apparent from much of the mainstream reporting of the clashes. This New York Times story from April 5, timed for the eve of the second of Friday encounters, is typical of the paper’s coverage. (I’ve chosen the Times for examples of U.S. reporting because it still sets the tone for much “serious” or mainstream U.S. coverage, particularly in foreign reporting, where the Times retains a formidable retinue of correspondents. It is also the bête noire of media watchdog groups that claim the media is biased against Israel.)

The Times story quotes officials from Israel and Hamas, as well as Palestinians, to describe the events of the previous Friday. It also quotes experts in the laws of military engagement: B’Tselem, the Israeli human rights group, arguing against the use of live fire, and veterans of the Israeli army’s legal corps explaining why it may be necessary.

The writers of the story, David M. Halbfinger and Iyad Abuheweila, seem to do exactly what Friedman is asking: seek out experts on engagement. To be sure, B’Tselem often is highly critical of Israel and often is at odds with the settler movement, of which Friedman was an active supporter. But the question of “what could have been done differently or better” is discussed at length, with substantial quotes from experts who come to different conclusions.

Similarly, on May 14 and 15, the day of and the day after the deadliest violence — coinciding with the opening of the U.S. embassy in Jerusalem — the Times does not get deep into analysis, but it does quote a range of assessments of the violence, which resulted in the killing of some 60 Palestinians.

In the frequently updated story on May 14, the Times’ reporting team endeavors to bring the big picture into focus. A segment addresses the reporting that an infant girl was killed by tear gas, and notes important caveats from the Israeli and Palestinian side. It made clear that the Palestinian protests were not peaceful, describing Hamas officials who urged martyrdom — the purpose of the demonstrations was to “draw the map of return in blood,” says one — and falsely told protesters that the fence had been breached so they might press forward.

The reporting makes clear that the Gaza protests were about claiming land in Israel as much as they were about the embassy opening, and quotes an anonymous but “well-informed Middle Eastern government official” as saying that Hamas had hoped to kidnap an Israeli.

On those two days, the Times quoted assessments by B’Tselem and Doctors Without Borders that the Israeli use of live fire was unjustified. It also quoted the Israeli army as saying that at least 24 of the dead were “documented” terrorists and that there were at least three instances in which armed terrorists had attempted to infiltrate under cover of the protests.

The Times also published close-ups on both sides: of a young Palestinian protester driven to the fence in part because he despaired of his future in the poverty-stricken strip, and of Israeli communities living under a regimen of fear, with a focus on a kindergarten shelled before preschoolers had arrived.

Still, Friedman is not alone — certainly among advocates for Israel — in the belief that the coverage of the Gaza clashes was skewed. Camera, the pro-Israel media watchdog, has objected to the use of the term “protesters” by the Times, the Washington Post, and others to describe the Palestinians at the border, suggesting “terrorists” would be more appropriate.

Camera also criticizes mainstream media for “uncritically” quoting casualty claims made by the Hamas-controlled Palestinian Health Ministry, although it doesn’t say where the casualty numbers are in dispute. And in the same breath that it criticizes the media for underreporting the prevalence of Palestinians armed with explosives, firearms, knives, and Molotov cocktails, it notes that NPR interviewed a 19-year-old Gazan who said “We want to burn Jews.”

Two stories in particular suggest why the media and a government official like Friedman might view their roles very differently. The Times and other newspapers extensively covered the killings of Yasser Murtaja, a photographer, and Razan al-Najjar, a medic. The Palestinian side said both clearly identified themselves as observers of the border protests, not as participants. The Israeli side, as the media reported, insisted that Murtaja was a high-ranking Hamas official and that the case of al-Najjar, who was killed Friday, is under investigation.

Reporters covering their deaths noted that Israeli officials, including Defense Minister Avigdor Liberman, have not presented any evidence that Murtaja was a participant or a Hamas official. They noted that he had been vetted by the State Department to receive funds from the U.S. Agency for International Development.

In both instances, and in reporting on the question of the use of live fire, journalists saw it as their role to query and quote officials on both sides, but to take nothing on faith. By contrast, Haaretz quoted Friedman as saying that from “speaking to people in the military in the State of Israel, the United States, and other countries whose confidentiality I’ll maintain,” he concluded that less lethal means were not available to Israel during the protests.

With whom did Friedman speak? He doesn’t say. Reporters may have spoken to the very same experts, but the journalistic reflex would be to be skeptical. Israeli reporters, for example, still remember assurances by Golda Meir’s government that Syrian and Egyptian troops did not pose an immediate threat; that was days before the 1973 Yom Kippur War. And just 15 years ago, a credulous American journalistic community heeded batteries of “experts” and government officials who either misled the public about Iraq or got it utterly wrong.

Haaretz may irk Friedman for its left-wing slant, but if Israel’s claim that it is the only democracy in the Middle East means anything, it is that it allows a free press to challenge the government and question its military’s tactics. Such freedom might even lead to opposite conclusions.

An analysis by Haaretz’s Ilene Prusher (who is, full disclosure, a friend) wondered why Israel did not deploy “a myriad of other methods of riot containment that are used worldwide and generally don’t result in scores of deaths.” The same newspaper’s Amos Harel, meanwhile, laid the blame for the killing squarely at the feet of Hamas. If Harel blamed the Israeli government, it was for not anticipating that it would be played by the terrorist group.