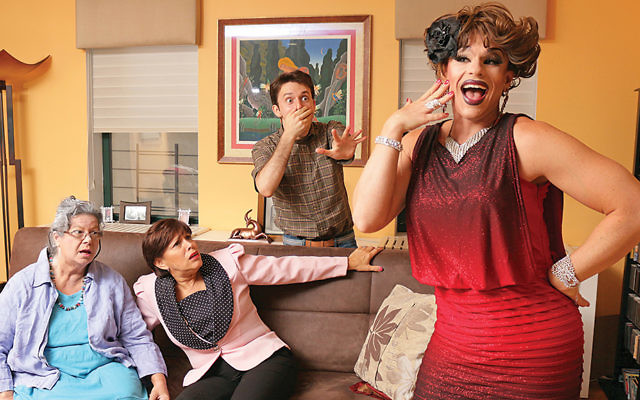 The most interesting thing about “Daddy Issues,” the new 90-minute comedy at the Theatre at St. Clement’s on 46th Street, is how much our attitudes toward gay men and lesbians have changed since 1982.

That’s the year in which this farce by Marshall Goldberg is set. Donald Moskowitz (Matt Koplik) is an aspiring actor in his early thirties, living alone in an over-decorated apartment in a sketchy New York neighborhood. His overbearing father, Sid (Tony Rossi), barges in to convince him — yet again — to marry and give him and Donald’s mother a grandchild. Sid knows his son is gay, but he thinks Donald can pretend to be straight long enough to convince an unsuspecting woman to marry and have a child with him. Also, he wants Donald to forget about acting and take over his business. “You can be the prince of metal balls,” he promises.

None of this is even slightly plausible today. Gay men and lesbians marry and raise children without much controversy, at least in this part of the country. Not many parents hope their children will lead lives marked by shame and deception for being gay anymore, so it’s easy to forget that just 30 years ago the situation in “Daddy Issues” would have been believable.

Sadly for comedy writers, social progress eliminates the conflict that makes jokes work. Accordingly, back to 1982. Donald is a good son and can’t bear to disappoint his parents and his kvetchy grandmother, so he makes up a story that he had a son with his old college girlfriend, Mary Ellen McGuire. That’s the one he broke up with when he realized he was gay. (Today, he might have come to that conclusion in middle school.) Sid is overjoyed and can’t wait to tell his wife. Quickly, Marion Moskowitz (Kate Katcher) shows up with gifts for her grandson, and then Grandma Moskowitz (Deb Armelino) appears, with more presents. Confusion reigns since Marion thought the boy was 10 months old and Grandma was sure he was 10 days old. They are astonished to learn that he’s 10 years old. How could their Donald have kept this secret for so long?

Of course, the whole family wants to meet the boy, and Donald has to do some quick thinking with his casting friend Henrietta (Elizabeth Klein) and his drag-queen pal Levi Krauss (Shua Potter). They come up with the idea to rent Donald’s 10-year-old neighbor and pass him off as his son. The boy, Johnny Walker (Alex Ammerman), agrees, after negotiating a hefty fee, and they’re off to arrange a bagel brunch. Needless to say, things don’t go as planned.

The sitcom structure of “Daddy Issues” leaves plenty of room for jokes, and quite a few of them land. The ones that don’t could, if the timing were tighter. Overall, David Goldyn’s direction is not crisp enough to keep the play moving as energetically as it should. There is a door that opens and closes a lot, but it needs to slam louder and faster. The uneven cast tries to maintain the play’s buoyancy, and Shua Potter and Elizabeth Klein are genuinely funny as Donald’s feuding friends. Koplik has a fresh, likable manner, and one of the most charming bits is his musical number with his old girlfriend, played by Allyson Haley.

“Daddy Issues” isn’t going to go down on anyone’s list of unforgettable theater experiences, but it is amusing enough to satisfy the casual theatergoer looking for some harmless fun. It is useful to remember how quickly society can change when trends turn. The once unthinkable can become commonplace in a very short time indeed.