Neither clock is guaranteed to keep ticking all the way down.

News AnalysisThe international community hopes to thwart Iran’s acquisition of a nuclear weapon. And despite the upheaval in Iran last summer, no one is sure that the autocratic regime in Tehran is on its way out – or whether it will be replaced by a true democracy.

Still, recent developments on the ground – the rise last June and subsequent repression of Iran’s democracy movement, and Tehran’s apparent nuclear gains – have altered assessments about the two countdowns and whether they are influencing each other.

Some hard-liners such as John Bolton, the Bush administration’s pugnacious U.N. ambassador, say getting tougher on Iran would empower its democracy movement. Others, like Shoshana Bryen, the senior director for security policy at the Jewish Institute for National Security Affairs, counter that the democracy movement has essentially been snuffed out – providing another reason for the West to get tougher. 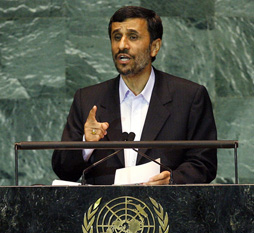 Iran watchers in Washington and Israel wonder what will come first: an Iranian nuclear bomb or the turning out of the regime led by President Mahmoud Ahmadinejad, shown addressing the United Nations General Assembly on Sept. 23, 2009. UN Photo/Marco Castro

Bryen says the nuclear clock is ticking faster – earlier this month, Iran announced plans to build 10 new nuclear fuel plants – and the regime in Tehran has figured out how to gum up the democracy clock.

“I think we are now not able to wait for the overthrow,” Bryen said, arguing that mass imprisonments and executions have intimidated Iran’s opposition.

“We see that the grip of the regime on its own people and even the cohesion of the leading group of ayatollahs are both being cracked and probably the countdown, historic countdown, toward the collapse has already started, but I don’t know of any serious observer who can tell us whether it will take two years, four years, six years, or 10,” Barak said in an address to the Washington Institute for Near East Policy. “And it’s clear to me that the clock toward the collapse of this regime works much slower than the clock which ticks toward Iran becoming a nuclear military power.”

A similar split is taking hold among those who oppose harsh sanctions. Many in this camp, spearheaded by the National Iranian American Council, say that the successes of the Iranian opposition movement bolster the argument for holding back on tough measures.

Others, however, heeding “realists” such as former George W. Bush administration officials Flynt Leverett and Hillary Mann Leverett, say sanctions are futile precisely because the Iranian government is here to stay, so it’s better to talk to the current regime.

The Obama administration appears to be shifting toward a dual track of investment in the democracy movement and tougher sanctions.

Secretary of State Hillary Rodham Clinton is accelerating talks with major powers toward a new sanctions package and said last month that Iran’s government is assuming the trappings of a junta.

A report last month by the United Nations nuclear watchdog, the International Atomic Energy Agency, for the first time cited as “credible” reports from Western intelligence agencies that say Iran is actively working toward a bomb. The report is helping the United States make the case for sanctions to holdouts in the U.N. Security Council.

P.J. Crowley, the spokesman for the U.S. State Department, said Feb. 22 that the Obama administration is still focused on outreach – specifically an offer to get Iran to give up its low-enriched uranium in exchange for uranium enriched to medical research levels. He said an international, multilateral sanctions regime was close – underscoring the Obama administration’s focus on pressing for U.N. sanctions targeting the regime’s leadership and the Iranian Revolutionary Guard Corps that protect it.

Crowley also would not count out unilateral congressional sanctions targeting Iran’s energy sector – the approach being pushed by many pro-Israel groups.

Ori Nir, a spokesman for Americans for Peace Now – the only major pro-Israel group opposing the congressional sanctions described as “crippling” by their sponsors – says Iran needs active diplomatic engagement precisely because of the nuclear threat and the futility of sanctions, which he warned could backfire.

Nir says the prospect that the regime in Tehran would give way to democracy is too ephemeral right now to count on as policy.

A group of foreign policy realists for months has been advising the administration that investment in the Iranian opposition movement is futile.

In an opinion piece in The New York Times, Flynt Leverett and Hillary Mann Leverett derided Obama’s outreach to Iran as half-hearted and said engagement with the real power – the Iranian regime – made better sense than staking anything on the democracy movement.

Not everyone is ready to count out the democracy movement.

“The system has lost its amazing capacity to bring everyone together,” he said of the regime in a Feb. 5 talk at the Washington Institute for Near East Policy.

Cvach says the successes of the opposition coupled with the Obama administration’s attempts at outreach to Iran lay the groundwork for sanctions that would target the regime’s elites.

“We should now focus on pressure on the regime,” Cvach said. “We don’t need to know whether it has nuclear weapons or how deep the fissures are – what we know is enough to raise the pressure.”

Trita Parsi, who heads the National Iranian American Council, says that sanctions could be counterproductive unless they are narrowly targeted.

Meir Javendanfar, a respected Iranian-born Israeli analyst who believes the post-June unrest has wounded the Iranian regime, favors the sanctions targeting the Guard’s banking and business interests – for now.

Broader sanctions, he says, are risky, but the prospect of a nuclear theocracy is riskier.

“Not imposing sanctions will be the worst option,” he said. “It will send a signal to Khameini,” the supreme ruler of Iran, “that the West is weak.”