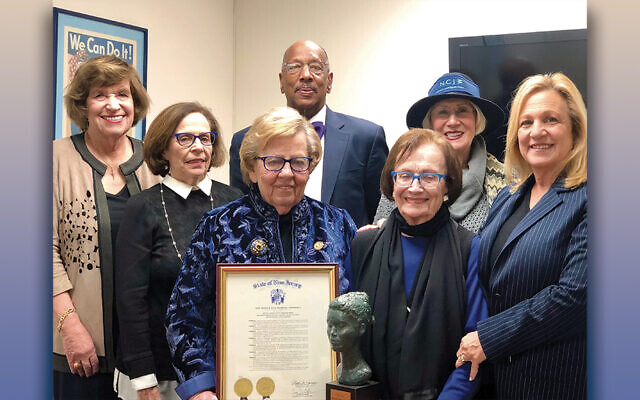 On January 14, state Senate Majority Leader Loretta Weinberg, Assemblyman Gordon Johnson, and Assemblywoman Valerie Vainieri Huttle presented the Bergen County section of the National Council of Jewish Women with a joint resolution to commemorate Hannah G. Solomon Day. Ms. Solomon was the organization’s founder and first presiden and January 14 was her birthday. The resolution pays tribute to her record of service, leadership, and commitment.  In 2016, the New Jersey Legislature designated January 14 of each year as Hannah G. Solomon Day, commemorating her birth in 1858.

In accepting the joint legislative resolution, co-presidents Elizabeth Halverstam and Bari-Lynne Schwartz thanked the legislators and expressed gratitude for their longstanding commitment to championing groundbreaking social justice legislation, which reflects Ms. Solomon’s vision and the mission of NCJW.

In 1893 Ms. Solomon brought 90 Jewish women from all over the United States to the Parliament of Religions at the Chicago World Fair and founded the National Council of Jewish Women, the first national Jewish organization for women. Unanimously elected as its inaugural president, Ms. Solomon led the organization in its landmark battles for laws restricting child labor, for child welfare programs, and for improved housing, education and health care for the poor.

Today, the national organization of 90,000 women (and a few men) works to improve the quality of life of women, children, and families through advocacy and community services.  The Bergen County section, which includes more than 1,000 members, advocates for issues such as reproductive justice, the fight against human trafficking, common-sense gun laws, voting rights, and the prevention of domestic violence.  It supports 19 local nonsectarian services with volunteers and grants to provide special programs to their clientele. The organization also provides educational programs and speakers throughout the year, including six general meetings and a variety of study groups, book groups, trips and advocacy opportunities. For more information go to ncjwbcs.org or call (201) 385-4847.