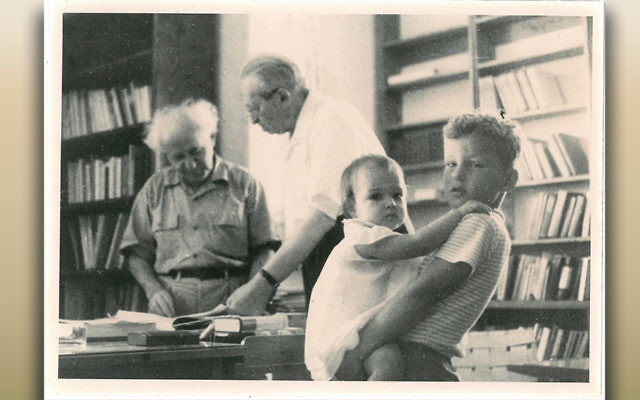 Alon Ben-Gurion holds his baby sister as his grandfather works in his study, sometime in the late 1950s.

George Washington, the father of our country, didn’t have any direct descendants, although he did have stepchildren and then step-grandchildren. His fatherhood was metaphorical.

That’s not true for David Ben-Gurion. He arguably was the father of the modern state of Israel — he was among many other things its first prime minister — or at the very least one of its fathers. He also had flesh-and-blood children, three of them, and he had grandchildren as well.

His grandchildren knew Ben-Gurion as an actual person, who lived and breathed and ate and slept and got dressed and sometimes played with them, a person who thought and loved and simply was, as a human being, as well as an exemplar and a hero.

One of his grandsons, Alon Ben-Gurion, who lives in Israel for part of the year and spends the rest of it right across the bridge in Westchester County, will speak at the Kaplen JCC on the Palisades in Tenafly to introduce a film about his grandfather. (See box.)

The film, “Ben-Gurion, Epilogue,” comes with a story. It is a 70-minute movie culled from six hours of interviews, made in two-hour installments over the course of three days in 1968. It was toward the end of Ben-Gurion’s life — he died in 1973 — he recently had been widowed, and he had chosen to retire to the out-of-the-way Kibbutz Sde Boker, where, he said, he could be just David.

The interviews were done as research for a feature film on the former prime minister, which failed and was seen as so unimportant that even its name seems lost to the internet. The interview was filed and forgotten.

“But about two years ago, a group of producers heard about it, and they went to find it,” Alon Ben-Gurion said. They found the video portion at Steven Spielberg’s Jewish film archive in Jerusalem. But in 1968, although video and audio recordings were made at the same time, they were kept on different media, and easily could become separated. That’s what happened to the Ben-Gurion tapes.

“Then someone who had been involved with the production, and who was 84 years old, told them that the audio was in the Ben-Gurion archives in Sde Boker,” Mr. Ben-Gurion said. That was correct. The filmmakers found it, and painstakingly combined the sound with the pictures.

“In my mind, every Jewish person in the world should see this movie,” Mr. Ben-Gurion said. Why? “Because the world is in turmoil,” he said; he is not going to talk about politics, either Israeli or American, but simply wants to make the obvious point that no matter its cause, the turmoil is real, and we look away at our peril. 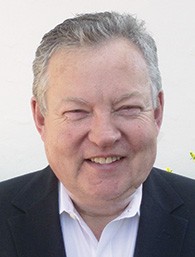 The film is an exploration of David Ben-Gurion’s philosophy, Israeli history, and the prime minister’s hopes and fears for the future.

His grandfather “created Israel,” Alon Ben-Gurion said. “He had the vision. The film comes alive because he was so authentic, and when you see it you’ll know that.” So in that case, what was his prescription for today’s situation? What would he do? “See the movie, and you’ll know,” his grandson said. He doesn’t want to give too much away.

Alon Ben-Gurion was born in 1951, when the state of Israel still was very young, perhaps in its toddlerhood. “We didn’t have at that time the legacy of first families,” he said. “It was a very simple life. Everybody did what he needed to do, and the fact that my grandfather was prime minister — that was great, and he had bodyguards, but that was all that was different.

Mr. Ben-Gurion has strong memories of his grandfather. “Saba was an interesting man,” he said. (Saba is Hebrew for “grandpa.”) “He was a pragmatist, and a visionary. He came to Eretz Yisrael in 1906, during the Ottoman Empire”; he knew where he wanted to take it, and grew into the job of making it be so.

“I asked him once, ‘When did you decide to become a leader? Did you have a dream, and then wake up one day and decide to do it?’

“How would a man in Poland fall in love with Israel?” Mr. Ben-Gurion asked rhetorically. “He falls in love after he reads the Bible — he knew it inside out, he learned Hebrew at the age of 3. Years later, Shimon Peres said that he heard that and asked him ‘Why did you wait so long?’

“He took the Jewish nation, after 2,000 years in exile, and brought them together to declare the State of Israel, and the rest is history.” 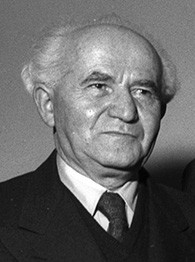 His grandfather was a font of gnomic sayings. “He said that to be a realist in Israel, one has to be a dreamer,” Mr. Ben-Gurion said. “So try to figure that one out.”

He also was brilliant, and he pursued his interests wholeheartedly, even relentlessly. “He had insatiable curiosity about everything,” he said. “He questioned and questioned; he went into all the details.

“I have met a lot of leaders in this world, and I am not biased — the magnitude and stature of David Ben-Gurion is above all of them. His mental capability was above and beyond what people like you and I can do.

“In those days, of course, there were no computers, and he used to write 30 letters in 30 minutes. He read two books every night, and he had a phenomenal memory. And he believed that in order to understand a book, you needed to learn the language it was written in.

“When I went to the archives in Sde Boker in May, I asked if there was anything that indicates how he studied, and they said yes. His copy books. They had them. He studied ancient Greek like a student in school, and he learned it with the speed that normal people don’t have when they learn a language.”

That’s an example of the way his grandfather thought, Mr. Ben-Gurion said. “He challenged everything that existed. When someone said, ‘It cannot be done,’ he said, ‘Who said so?’” When the answer was “the experts,” his grandson continued, “he’d say ‘Then change the experts!’

“That’s how Israel was built.”

His grandfather was a pragmatist who believed in dreaming, he said. “The answer that it cannot be done is not an answer. He called the Negev” — the desert that makes up Israel’s south — “the cradle of Israel. When people said that no one can live there because there is no water there, he said ‘Find water.’ When people said there are no trees there, he said ‘So plant trees.’ He planted trees in Sde Boker. You can see them today.

“Before there was desert. Now there are trees. Mankind harnessed nature to serve its purpose. When everyone said ‘You cannot declare the state of Israel,’ he said ‘Yes, we can.’” 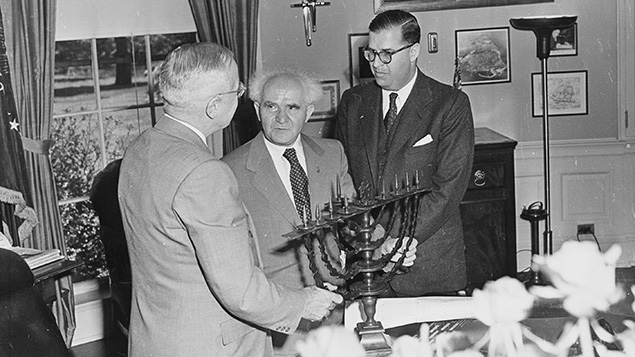 David Ben-Gurion resigned in 1953 because “everyone in Israel depended on him, and he knew that you can’t build a democratic state like that. He was becoming someone he didn’t want to be. He wanted a democratic country, with ministers and judges and legislators. He didn’t want everything to go to him.” That resignation didn’t work out as intended — Israel’s politics, like those in every democratic country, can be tangled — but in the end he retired to Sde Boker.

“For young people today, you are talking about a historic relic,” Mr. Ben-Gurion said. “My grandfather was born in 1906. For them, it’s like World War II is for me. It is so far away. So they don’t know the details. They don’t know the real history of how Israel was built.

“Israel is not perfect, but when you see it being attacked — there are ways of dealing with things, with crises. The situation was more dire then,” when his grandfather was a young man, “then it is now. We have to learn from his vision of the state of Israel. That’s what this film is trying to convey.

“We have to relearn the vision,” Mr. Ben-Gurion said. “We have to recapture it. We have to think differently than we are thinking today.”

What: Will speak at a question-and-answer session after “Ben-Gurion, Epilogue” is screened

Where: At the Kaplen JCC on the Palisades, 411 East Clinton Ave. in Tenafly

And also: He will speak at a VIP reception at 6 p.m.