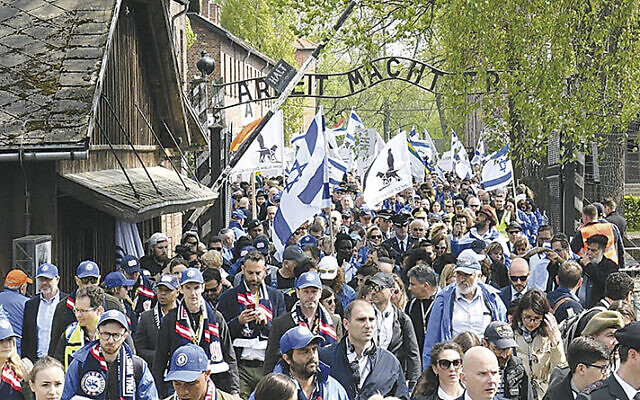 Participants of the March of the Living exit a gate in Auschwitz, Poland, on May 2, 2019.

Dr. David Machlis of Englewood prides himself in how he has expanded the parameters of the March of the Living, which he helped found and for which he is an international vice chair.

Last year, he worked with Rutger University’s Miller Center for Community Protection and Resilience to bring deans of law schools and schools of education along for the march. “They’re teaching the future teachers,” he said. “It might be the best way to combat hatred, intolerance, and anti-Semitism.”

So it’s not a surprise that now, after the march was cancelled — this is the first time since it began in 1988 that a cancellation has been necessary, for obvious reasons — he is leading the effort to bring the march’s message alive with a special Yom Hashoah broadcast.

Normally, the March of the Living brings together more than ten thousand participants, many from Jewish schools and youth movements, who come from more than 20 countries, and brings them to Poland. On Yom Hashoah, they march silently from Auschwitz to Birkenau, in a symbolic effort to reverse the death marches of the Holocaust. More than a quarter of a million people have participated in the march. 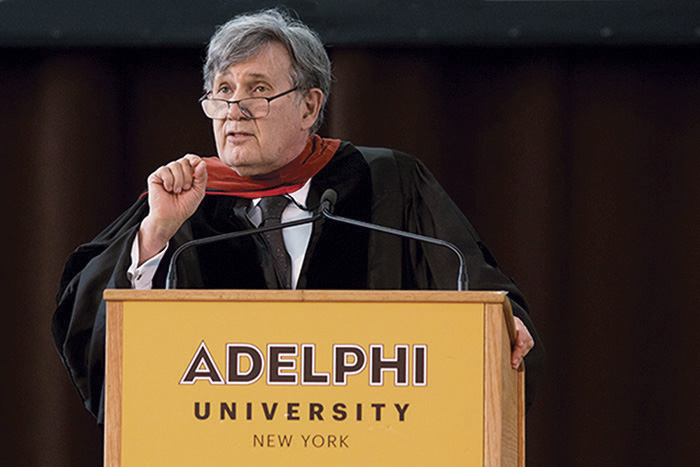 The broadcast will be shown on the Jewish Broadcasting System as well as online at www.motl.org, at 7 p.m. Eastern time on Tuesday, April 21, Yom Hashoah. The broadcast replaces what had planned as a live webcast from the gates of Auschwitz.

The pre-recorded program will last an hour and a quarter, and it will feature such dignitaries as Israeli President Reuven Rivlin, Holocaust survivors, and March of the Living alumni.

Dr. Machlis is an associate professor of finance and economics at Adelphi University. He grew up with very little Holocaust education.

“My mother came from Poland around 1920, when she was 3 years old,” he said. “She was one of eight children. Her father was a renowned rosh yeshiva brought by Yeshiva University. All I knew about was the pogroms.”

He knew survivors — “I remember at times seeing marks on people’s arms” — but in his years of day school education — he graduated from the Hebrew Institute of Long Island in 1960 — there was little actual education about the Holocaust.

Dr. Machlis came to the March of the Living through his friendship with Dr. Shmuel Rosenman, its cofounder. Dr. Machlis had met the Dr. Rosenman, an Israeli, when he was working as a Zionist representative in New York in the 1970s. In the 80s, Dr. Machlis spent a long sabbatical in Israel and worked on the March’s creation.

He continued to advise March on the Living; you might even say to nudge it, urging that the March “has to go beyond the Jewish population, beyond speaking to our own people. I remember on a warm day in June, 1993, in the March of the Living’s basement office in Tel Aviv, I was asked to come up with something.

“Since then, through programs I’ve designed, one third of our participants have been non-Jews, 60 to 70,000 altogether.

“In 1999 we created a program, March of Remembrance and Hope, earmarked for college students of diverse backgrounds. At its peak we had 400 students from 40 colleges. Each had studied the Holocaust on their campus for the spring semester, and then gathered together at an airport hotel for 20 to 40 hours of seminars. Ten of the people who ordered kosher food were Muslims.”

The March of the Living has been putting together its video presentation, recording some people on Skype, some people in studios, and bringing in earlier interviews with survivors.

The message that “the Holocaust is not just a Jewish issue; it’s a universal issue” will come through.

Mehnaz Afridi, who is Muslim and the director of Manhattan College’s Holocaust, Genocide and Interfaith Education Center, will be among the presenters. John Farmer, the former New Jersey attorney general who served as lead counsel of the 9/11 Commission and who now heads Rutger’s Miller Center will speak.

“You’ll be inspired by listening to him,” Dr. Machlis said.

There also will be four-minute presentations from two Holocaust survivors.

“Everyone should want to learn more and have a meaningful emotional experience about the Shoah,” Dr. Machlis said. “It’s a very moving, diverse program. It’s part of wanting to make sure the world does not forget, and using the lessons of the Shoah to combat hatred and intolerance and, most importantly, anti-Semitism and the BDS movement.

“We must learn from the past, so that a more just and tolerant society evolves for the benefit of all humankind.”