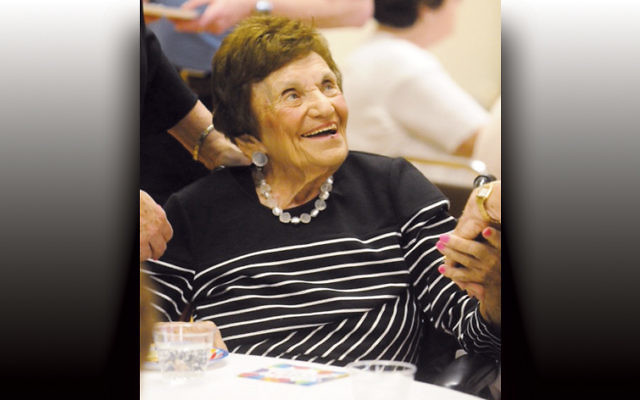 It’s not really an unlikely friendship — despite the fact that one woman is in her 70s and the other is 103.

They bonded over bridge in 2006, but their relationship grew steadily as they got to know each other better. Today, the younger woman has become a valuable repository for her friend’s stories.

On September 9, centenarian Mildred Nochimson was honored by Congregation Beth Shalom in Pompton Lakes. At a special Shabbat service and celebration, the congregation presented her with a plaque for her many contributions to the synagogue. As it happens, this was particularly fitting. Her parents, Rose and Benjamin Singer, helped create that synagogue, and Rose Singer served as the first president of its sisterhood — a role held later by her daughter.

Patricia Leclerc — Ms. Nochimson’s friend, primary caretaker, and informal biographer — said that she planned to take Ms. Nochimson to the synagogue for several hours on the High Holy Days. “Everyone comes over and says, ‘Nice to see you.’ Many people will say, ‘You don’t know me, but you knew my mother.’ They’re very warm and welcoming and friendly. It makes her feel good to go there.”

Rabbi David Bockman, the congregation’s religious leader, noted that while Ms. Nochimson no longer gets out as much as she used to, “she still does everything with style and aplomb,” and with “a beautiful and infectious smile. She hand-writes personal thank-you notes that are genteel and heartfelt. I’m just very glad that she still finds it important to belong to our synagogue.”

Mildred Nochimson’s story begins small — literally — and grows increasingly bigger. She was born on July 13, 1913, in a second-story apartment above the True Value Hardware store on Wanaque Ave in Pompton Lakes. “She arrived two months early, weighing about two lbs., and wasn’t expected to live,” Ms. Leclerc said. “Her grandmother, Marsha Krigstein, nestled her in her father’s sock drawer to keep her warm, and despite all odds, Mildred survived.

“Imagine her mother’s doctor’s surprise when meeting Mildred and her mother 12 years later on a street in Paterson. When he realized that this was the same child, he rushed them to City Hall to register Mildred’s birth, since he hadn’t done so, thinking she wouldn’t live.”

There was no high school in their town, so the Singers moved to Paterson and Mildred was able to go to Eastside High School there. Then she went to Syracuse University — “at a time when few women attended college,” Ms. Leclerc said — and earned a degree in teaching. Mildred met Sam Nochimson when he was teaching Hebrew at a synagogue in Paterson. Later, he became an attorney. They married in 1936 and had two children, Judith Stein, who lives in New York, and David Nochimson, now in Santa Monica, California. Both are attorneys.

“Mildred and Sam continued Rose and Ben’s legacy as active members of Congregation Beth Shalom,” Ms. Leclerc said, adding that Sam Nochimson was a past president of the synagogue. Mildred also was active in the Pompton Lakes Women’s Club and the Pompton Lakes Jewish Center, and was president of her local Hadassah chapter. Israel Bonds honored the couple in 1951 “in appreciation for their pioneering support of Israel.”

“Their children learned about their Jewish heritage and faith from their parents and Congregation Beth Shalom,” Ms. Leclerc said. “Mildred cooked the entire Passover seder for her extended family and friends until age 100,” and she was reluctant to surrender that role to her niece.

“She kept a kosher home and lit candles,” Ms. Leclerc continued. “Faith and her synagogue are very important to her. She did as much as she could until she couldn’t. I took her to the kosher butcher and to buy kosher wine. She pressed her tablecloth until she was 100.”

She also was a good businesswoman. After her husband died and up until her late 90s, “she single-handedly rented the apartments she owned with her husband and took care of the taxes. She would also evict people. She did everything that was involved with having the properties. There was no property manager.”

“I was there for emergency gall bladder surgery,” she said. “There was a curtain between our beds. People kept coming in to see her — the director of the hospital brought her a fruit basket. She sounded very nice and when I was able to walk, I asked her if I could pull the curtain. There she was, an attractive woman reading a book.” And, Ms. Leclerc said, her fellow patient looked no older than 75. She was 93 at the time.

“She asked if I played bridge and I said I hadn’t played for 15 years.” Ms. Nochimson, it emerged, had a regular game with her slightly younger friend Ethel, but the other players all had died. “She said play with us. We’ll be patient. A week later she called on a day that I didn’t have anything planned and suggested we meet at a diner. She coerced me into agreeing to play bridge and we played the following week. I got out a book on bridge for dummies and found a fourth player.”

The game took place at Ms. Nochimson’s house. “She had her china set out and had made a cake,” Ms. Leclerc said. “It was a nice afternoon. We met at Ethel’s house the next week,” beginning what would become a 7-year weekly bridge game. “It was the highlight of their week.” Eventually, Mildred needed to stop, but not before Ms. Leclerc met some fascinating people, including one 92-year-old “who takes tap-dancing lessons every week. They’re sassy, savvy ladies.”

Ms. Leclerc and Ms. Nochimson became friends, as the younger woman began to drive her friend to doctor’s appointments and accompany her on other errands. While Ms. Nochimson lives with a full-time aide, “I have become her primary caretaker, overseeing what needs to be done around the house,” Ms. Leclerc said.

How do you describe a woman like Mildred Nochimson? “She’s dynamic,” Ms. Leclerc said. “She decides on something and does it. I met someone in the hospital who was her real estate agent 30 years ago. He said pretty much the same thing. She was always ready. She was up and dressed at 7:30 and ready to go.”

Ms. Leclerc attributes Ms. Nochimson’s longevity to “good genes. Her kids look absolutely wonderful. Her son, at 74, is a hiker and her daughter is very active.” Also, she added, “she never ate junk food and she kept her mind active. She did the daily New York Times crossword puzzle and was an avid reader, checking out the newest mystery novels at the Emmanuel Einstein Memorial Library.”

She noted that Ms. Nochimson attributes her own longevity to the fact that “I never drank alcohol nor smoked. I eat whatever I want, and enjoy a piece of chocolate every day.” But her biggest joy, Ms. Leclerc said, was the theater. “I took her to see ‘South Pacific.’ She went up to the conductor and said she had seen the original performance of this play. She saw all of them.” At the theater, “a light goes on in her. She is so happy.”

While Ms. Nochimson doesn’t get out as much as she did in the past, she remained active and independent as long as possible, Ms. Leclerc said. She began to work as a saleswoman at Lord and Taylor when she was 71 and kept it up until her mid-80s. “It gave her a reason to get up,” Ms. Leclerc said. “She was always on time. She would do it today if she could. She loved socializing with the staff and customers. She knew customer service and got steady customers. She gave them very personalized attention.”

Ms. Nochimson came by this expertise honestly. According to Ms. Leclerc, her parents owned and operated Singer’s Department Store on Wanaque Avenue, which “supplied everything from coats to shoes, and everything in between.” Mildred helped out at the store during busy times “and learned the retail business from the best.”

At 103, “Mildred is still a proud citizen of Pompton Lakes,” Ms. Leclerc said. “She still goes to the same hairdresser and nail salon and is always ready to accept a dinner invitation. She loves company and relishes visits from family and friends.” And, it should be mentioned, she received good wishes on her birthday from Pompton Lakes Mayor Michael Serra, Governor Chris Christie, and Barack and Michelle Obama.